“Perspective is to painting what the bridle is to a horse, the rudder to a ship... There are three aspects to perspective. The first has to do with how the size of objects seem to diminish according to distance; the second, the manner in which colours change the farther away they are from the eye; the third defines how objects ought to be finished less carefully the farther away they are” (Leonardo da Vinci).

Look at the image and verify Leonardo’s observations:


Look at  picture 2. It shows the linear perspective of the image above. Pay attention at the next points:


We are going to practise linear perspective.


THE HORIZON AND THE EYE LEVEL

Look at the next pictures to explore the value of horizon and eye level.
In picture 3, note how all four figures share the same eye level (it’s the same than the horizon line). This suggests that they are all the same height and are standing on the same plane (on the floor). It also suggests that the figures are the same height as any viewer of the picture. As a result, the organisation of scale and distance in the drawing makes good visual sense.

In picture 4, although the figures are still the same size than in picture 1, their eye levels don’t have any relationship to the eye level of the picture. As a result, the scale of the figures is totally confused.

This demonstrates the importance of the horizon/eye level to the organisations of scale and distance in a perspective drawing. It also illustrates the meaning of Leonardo’s words “Perspective is to painting what the bridle is to the horse, the rudder to a ship”.

One point perspective uses a single vanishing point to draw an object. It is the simplest form of perspective drawing, and is the perspective we are going to work with.

Look at the next picture:

One point perspective has been used to draw a box. 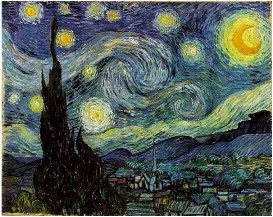